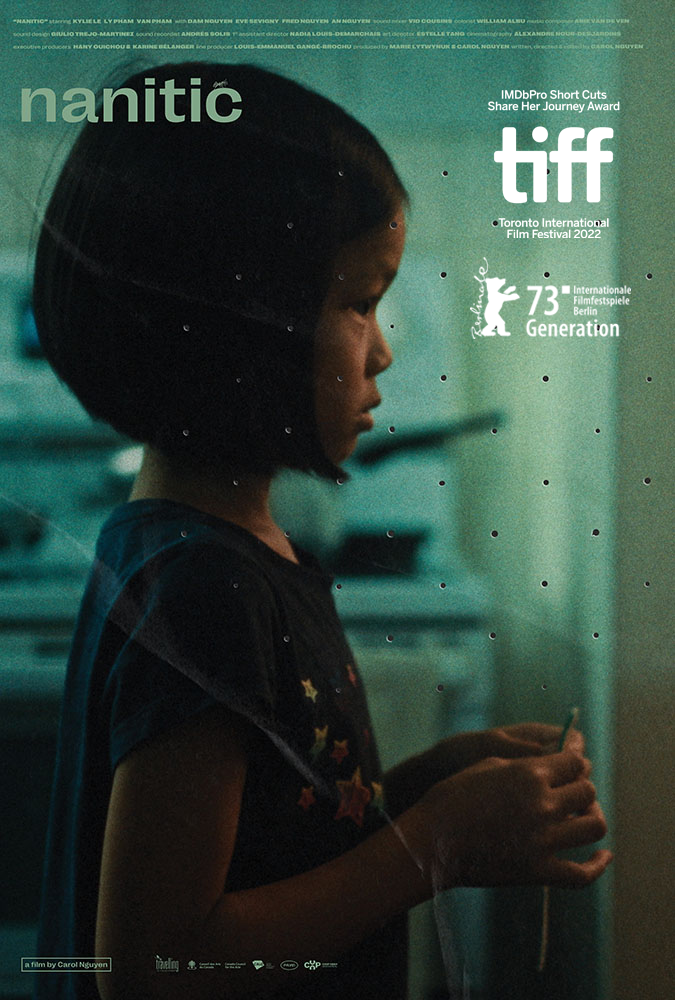 na·​nit·​ic / adjective: "The first brood of worker ants produced by a queen ant using only the reserved nutrition in her body. Nanitics shoulder the initial fate of the colony and are often underfed due to the conditions in colony building. Thus, nanitics may be smaller in size from later workers ants to optimize the survival of the group..." — But what happens to the colony when the queen dies? Had the nanitics done enough?
-

9 year-old Trang starts to shift out of oblivion as her aunt Ut tends to Grandma, who lies in her deathbed in the living room. How can a single body occupy so much space? What will happen when Grandma is gone?

Carol Nguyen is a Vietnamese Canadian filmmaker, born and raised in Toronto, now based in Montreal. Her films often explore the subjects of cultural identity, silence and memory. Her film “No Crying at the Dinner Table” (2019) screened at TIFF alongside IDFA, where she was additionally invited as the Opening Night speaker. In 2020, “No Crying” also received the Jury Prize for Short Documentary at SXSW. Carol is a 2018 Sundance Ignite fellow and a TIFF Share Her Journey ambassador. Recently, her project “The Visitors” was selected for the IDFA Project Space 2022, a development lab for first- or second-time directors. Today, Carol is writing and directing several projects, including two feature films as well as an animated short.

Director's Statement
The word “nanitic” is coined for first-generation worker ants, who sacrifice their life for the survival of the colony. Nanitics care for the offspring as well as the Queen Ant. As a result of their natural position and sacrifice, they are often smaller than the next generations and have less sufficient food supply. When a Queen Ant dies, it is stated that the colony slowly dies thereafter. These symbols run parallels to the lives of immigrant families throughout the generations. Grandparents hold the culture and family together (the Queen ants), parents sacrifice themselves for their children’s futures (the Nanitics), and for us, the children, we reap all the benefits of their hard work as the colony grows, but only to assimilate away from our cultures once our elders are gone. The film uses ants and their colonial structure as a metaphor, exploring the affect this familial moment on a macro level.